The Execution of Joseph Stagg

The Execution of Joseph Stagg 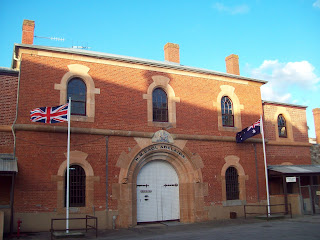 Joseph Stagg was executed at the Old Adelaide Gaol on 19 November 1840. Portable gallows were erected at the front gates of the gaol, and at 8 am, Stagg was hung in front of 700 spectators. Stagg was found guilty of murdering John Gafton at what is now Port Gawler.


Mrs Robertson, a resident near the Gawler River was approached by a man asking for a loaf of bread. He and his friends had not eaten for three days, and they were hoping for some charity. He offered her half a sovereign for the loaf. Robertson grew suspicious of Gafton and his cohorts, and at her first available opportunity, reported him and his friends to the local police constable.
Mounted police were sent to the area. They had been searching for three wanted cattle rustlers; Gafton, Fenton and Best.
Aboriginal trackers were employed who were able to track down the men’s campsite.
The trackers had led police to a small, recently constructed hut. Inside lay the lifeless body of John Gafton. Well known to police, Gafton had recently escaped gaol. He was found to have a gunshot wound behind one of his ears. In his pocket were 11 sovereigns, but no pistol could be found in the hut.

The Coroner and two jurymen were called to the murder site to collect the body and gather evidence. A known accomplice of Gafton, Joseph Stagg was accused of the crime and a warrant for his arrest was issued.
Stagg was apprehended by Constable Lomas and taken to the local police station where he was searched. In his possession were 16 pounds, several percussion caps, and paperwork that related to transactions between Stagg and Gafton regarding their recent cattle rustling.
Also in Stagg’s possession was a pistol, which was identified by Mrs Robertson as the one being in the possession of Gafton, the young man who had first begged her for the loaf of bread.

Stagg declared his innocence. All the evidence was circumstantial, but still, he was found guilty of murder and sentenced to execution.
His final days were taken up with him reading the bible.
The night before his execution, he was taken to the Police Horse Barracks, to be separated from the general population, and returned the morning of his execution.

He flatly refused to confess to the crime.

A Haunting at the Greenock Hotel

A Haunting at the Greenock Hotel 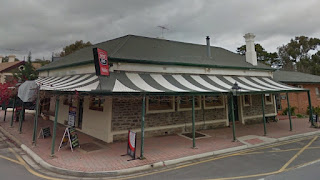 The original Greenock Hotel was located on the other side of the road from the one we see today. It was moved to its current location in 1956 by Mr G.E. Schluter into a house and corner shop that was once the General Cash Store, built in the 1850s by James Jackman.
Prior to the hotel, the building had also been used as the local post office.

In the 1960s a young married couple went to stay at the hotel with the new husband’s aunt. After closing, the couple retired to their bedroom. The newlywed wife awoke and went into the kitchen for a drink of water. As she passed the former living room, now a lounge, she witnessed a large coffin draped in black cloth and a host of people dressed in black standing around the coffin, silently weeping.
Over the years, other guests have also witnessed the same mourning event in the room.

Guests have also reported small objects, like keys going missing, only to find them in another place, far from where they knew they had been placed. Cold spots and doors opening and closing of their own volition are also reported.

A Haunting at the Tanunda Hotel


A Haunting at the Tanunda Hotel

The Tanunda hotel was built circa 1845 and was first licensed in 1847. In 1905 a fire severely damaged the building, so it was rebuilt. A second story built of Angaston marble was also added, and a balcony was imported from England, finishing the look it has today.

It is claimed that apparitions stalk its hallways, and disembodied footsteps can be heard walking into the bedrooms. One witness claims he awoke in his bedroom with a group of ghosts standing around staring at him. The witness believed that the ghosts followed him from the Langmiel Lutheran Cemetery just a little further south of the hotel after an evening of ghost hunting. 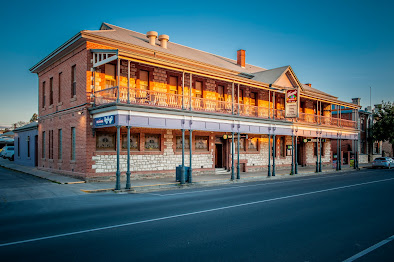 visit the Tanunda hotel at: https://www.tanundahotel.com.au/
Posted by Allen Tiller at 19:30 No comments:

The Mallala Hotel is alleged to be haunted by a ghost named George.
The Mallala Hotel was built in 1872 by Peter Farrelly, with his sister, Mrs Kelly being the first licensee. The second licensee was my great-great-grandfather, George Tiller. Another George to operate the hotel was George Reddaway in 1879…
This hotels ghost has been dubbed George, which is the most common name used to dub pub ghosts. George the ghost has been known to slam doors, make lights flicker, and let out the odd groan on occasion
Posted by Allen Tiller at 19:30 No comments:

The Tramway Museum St Kilda. St Kilda Road. Open Sundays: 12 Noon until 5 pm.
https://www.trammuseumadelaide.com/
-Start transcript-
In 1954, the South Australian branch of the Australian Electric Traction Association was formed. The A.E.T.A advocated for the retention and expansion of electric transport systems.
In 1957, the South Australian branch of the A.E.T.A. formed the SA Branch Australian Electric Transport Museum. Later they incorporated as the Australian Electric Transport Museum (SA) Inc.- now better known as the Tramway Museum at St. Kilda.
In 1958, the site of the former St Kilda Primary School became the storage home of Trams No. 1, 111, 192 and 42. In July 1962 the museum opened as a static display.
In 1972, the Salisbury Council, via government grant, built the tram line from the museum to St Kilda Beach, with volunteers building the overhead system. The tramway was officially opened in March 1974, with Tram No.1 leading the procession, the same tram used to open the Adelaide tramway in 1909. The museum currently has 26 trams, 5 trolly buses, two-horse trams, a horsebox and lots of displays showcasing Adelaide’s tramway history! The museum is run entirely by dedicated volunteers. T
he Tramway Museum is located on St Kilda Road, St Kilda, on the way to the St Kilda Playground. The facility is wheelchair accessible.
Trams leave the museum for St Kilda Playground every half hour. Your admission into the museum gives you unlimited tram rides for the day, with three different trams running consecutively every session.
The museum is open every Sunday from 12 noon until 5pm.
-end transcript.
Information sourced from the Tramway Museum website.
Posted by Allen Tiller at 19:30 No comments:

Kelly's Steps at Battery Point, Hobart, Tasmania are steeped in history...and ghosts.
Posted by Allen Tiller at 19:30 No comments: 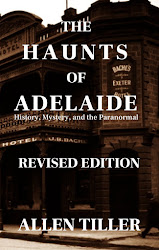