How to Talk to the Dead

Sir Arthur Conan Doyle was a tenacious champion of the spiritualist movement, after first discovering it in 1886. He devoured as many texts about the subject as he could, and became involved in seances and table tipping, as well as frequently visiting psychics.
Conan Doyle lost his first wife, Norma in 1906, and it is believed that the depression he felt after her death, may have triggered him to bury himself further in the occult and spiritualism.
He truly believed that his own son, Kingsley, who died in 1918, had contacted him from beyond the grave, talking through a medium. He stated that Kingsley had also touched him on his head during the séance.

Sir Arthur Conan Doyle arrived in Australia at Fremantle on board the R.M.S. Naldera on the 17th of September 1920. He then, on the same ship, arrived in, Outer Harbour, Adelaide on Tuesday the 21st of September, before making his way to Gibson’s Grand Central Hotel, where he based himself for the duration of his time in Adelaide.

Conan Doyle’s tour of Australia, titles “Death and the Hereafter” began in Adelaide: 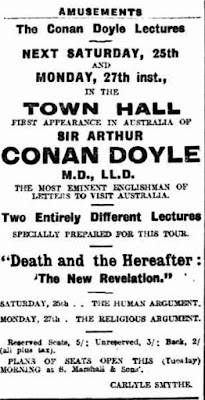 On Saturday the 25th of September, Conan Doyle delivered his first lecture in the Adelaide Town Hall, titled “The Human Argument”, to an estimated audience of 2000 people. It was noted by journalists of the time that many in the audience were well educated business people of Adelaide.
During this talk, Conan Doyle outlined what led him to his belief in spiritualism, and what he called “the hard facts” about the movement. He also detailed the history of spiritualism around the world up until that point.

On Monday the 27th of September 1920, Conan Doyle delivered his second speech, this time titled “The Religious Argument”. During this lecture Conan Doyle explained that spiritualism was not separate from the Churches beliefs, but that they were intertwined, and that one proves the other.[1]
On Tuesday the 28th, Conan Doyle delivered the final lecture to Adelaide audiences, titled “Pictures of Psychic Phenomena”. During this lecture, Conan Doyle had many of his photos that were taking during seances, projected onto a screen for the audience. Within the photos were alleged apparition photos of his son Kingsley, and of mediums producing “ecto-plasm”.[2]

Sir Arthur Conan Doyle then took his tour around Australia and New Zealand to sold out venues.

A small plaque on the Corner of Rundle Street and Pulteney Street (near Hungry Jacks), Adelaide, Australia unveiled in 1995 marks his stay in the City of Churches. 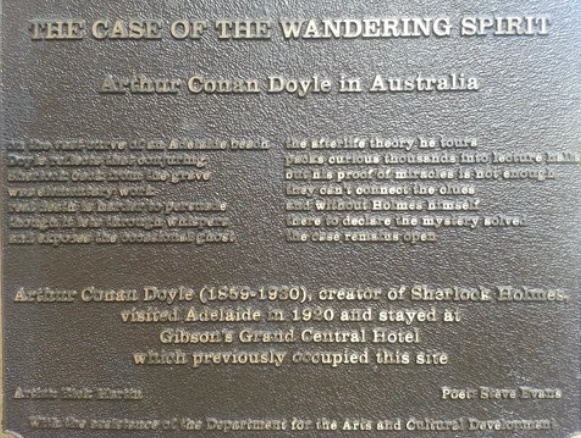 "I have seen few such cities, so pretty, so orderly and so self-sufficing,"

Conan Doyle had read a book by influential American spiritualist, Judge John Worth Edmunds, who had made claims that he had been able to communicate with his dead wife. This led to Doyle seeking out spiritualists in Southsea (UK), and participate in table turning sittings.
In 1893, Conan Doyle became a member of the British Society for Psychical Research, a group formed in Cambridge that aimed to investigate claims of paranormal phenomena and spiritualism with scientific analysis.

Conan Doyle became engrossed in spiritualism, and believed that “thought transference”, or telepathy was real. In 1917, he began to give public lectures about spiritualism and his own findings on the subject.
He became so obsessed with spiritualism he virtually gave up writing fictional novels, and instead concentrated almost entirely on paranormal study and his spiritualism pursuits.

While in Adelaide, Conan Doyle made time to visit the South Australian Museum, the Art Gallery and the Botanical Gardens on North Terrace. He stayed in the Grand Central Hotel, which was located on the corner of Rundle Street & Pulteney Street. The Grand Central Hotel was pulled down during 1975-1976 to make way for a carpark, and today is better known as the Hungry Jacks with the Rundle Street Lantern, above it.

Conan Doyle spoke highly of Adelaide, but his favourite part of his entire journey was a visit to the Humbug Scrub Wildlife Sanctuary with then owner, Thomas Paine Bellchambers.
He had read about Bellchambers wildlife sanctuary in a magazine article in the UK, and had decided then and there he wanted to meet him.

Conan Doyle wrote about his trip to the wildlife sanctuary in The Observer, in 1920, under the title “These Things Endure”.[2]
Within the article he praises Bellchambers and his connection to the land. He also makes a statement to the Government of the time (which fell on deaf ears, and still falls on deaf ears today), that

“Let the State acquire several blocks round Bellchambers area, and let the whole be enclosed. Let him be ranger with adequate remuneration. Let the roads connecting up be improved. All this would cost very little; but see what you would have in return! You would have a show place which folk would come from far to see. You would have a wonderful pleasure resort for the people of Adelaide. Finally, you would leave in the very best and most loving hands those numerous birds and other creatures which are seriously threatened with extinction. Do this, and your grandchildren will extol your wisdom. Don't do it, and in 10 years it will be too late.”

One of Conan Doyle’s questions to Mr Bellchambers was
“You are a man living close to nature. Do you ever see any fairies?”, with which Mr Bellchambers replied with a simple “no”.[3]

Continued next week with:

Sir Arthur Conan Doyle in Adelaide Part II - How to Talk to the Dead: