In 1931, Ivan White awoke to the horrifying sounds of screams from his neighbour's house on Brighton Road, Helmsdale. He jumped out of bed and ran across to the bungalow. Looking through the window, to his horror, he saw his neighbour, Stanley Jones, bashing his wife in the head with a hammer...


Stanley Jones was married to Gertrude, and together they lived with their 18-year-old daughter Marjorie and a 35-year-old female border by the name of Ms Sullivan. 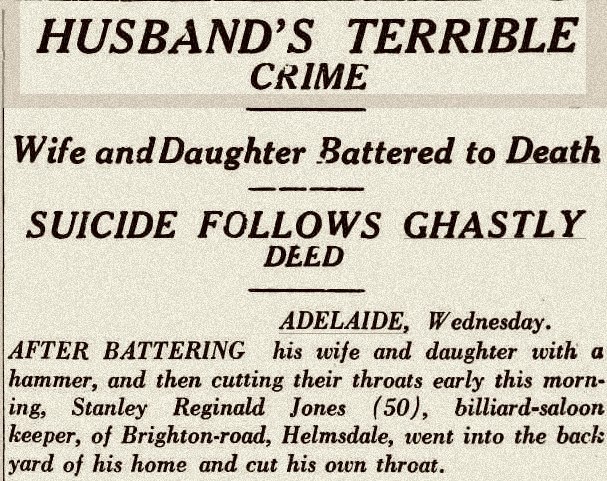 Stanley owned a Billiard Saloon Hall in Glenelg that had always been reasonably rewarding financially, but in recent times had become somewhat of a strain on his hip pocket.


On the night in question, Mr Jones came home from work and sat down to dinner with his wife, daughter and border. The foursome ate, and afterwards, Ms Sullivan and Marjorie excused themselves and returned to their rooms.
Ms Sullivan, later in her police statement, said after she had left the dining room, and returned to her room, Mr and Mrs Jones had sat at the table engrossed in amicable conversation.
At some point the same evening, after saying goodnight to his wife, Stanley began to write a note explaining that he was sorry for all the trouble he had caused and that the “The Billiard Saloon was the cause of it all”.
At about 2:45am, Stanley went into his daughter Marjorie's room and slit her throat with a razor. Marjorie couldn’t scream, but she managed to get up and make her way to her mother's room.
As she entered her mother's room, Stanley, her father, struck Majorie in the back of the head with a hammer.
Marjorie fell to the floor at the foot of her mother's bed.

Gertrude began to scream, and as she did, Stanley came at her with the hammer, swinging wildly At the same time he also slashed at her with a cut-throat razor.
In another part of the house, Ms Sullivan had been awoken by the screams. Realising something terrible was happening in the house, she jumped out through a window to escape and ran into neighbour Ivan White as he crossed the street to see what was going on.
Looking through the window at the horrors before him, Ivan tapped on the window. Stanley turned and looked him in the eye, with a savage expression on his face, and turned back to beating his wife around the head with the hammer.
Mr White rushed down the street to the nearest telephone box and called the police, who arrived within in five minutes.

The police entered the house to find Marjorie was still alive, but in a very bad way, they followed a trail of blood through to the rear of the house and into the backyard where they found Stanley, who had taken the razor to himself and slit his throat from ear to ear. He was still alive.


In the brief amount of time it took for medical help to arrive, both Majorie and Stanley died from their wounds...
Posted by Allen Tiller at 19:30 No comments: 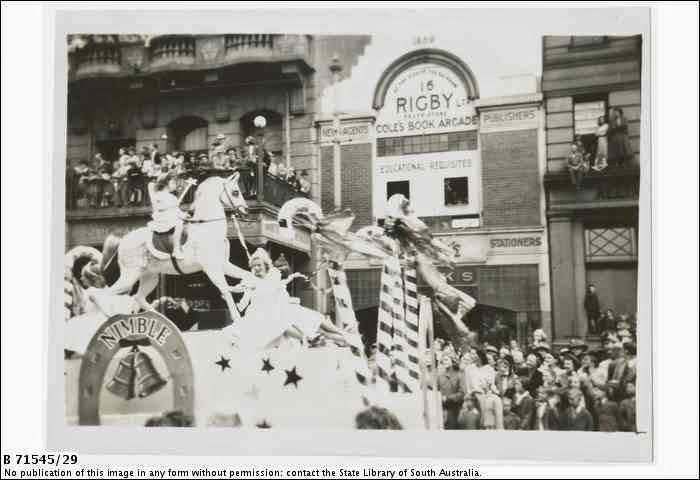 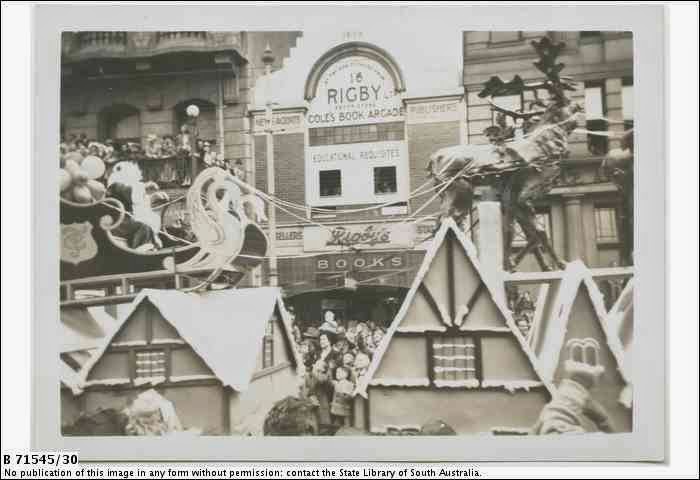 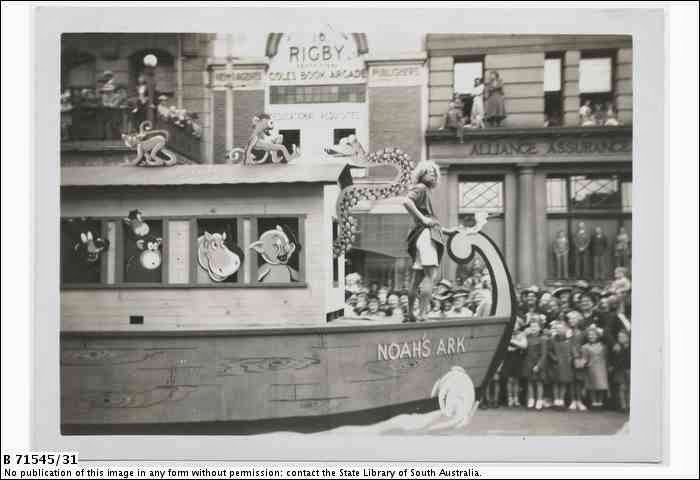 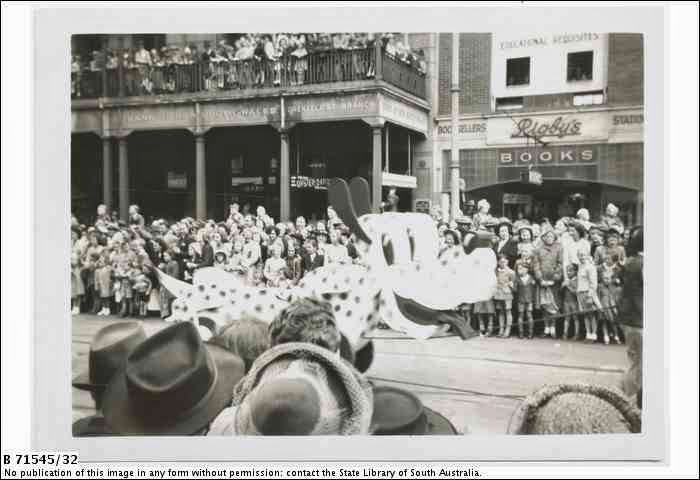 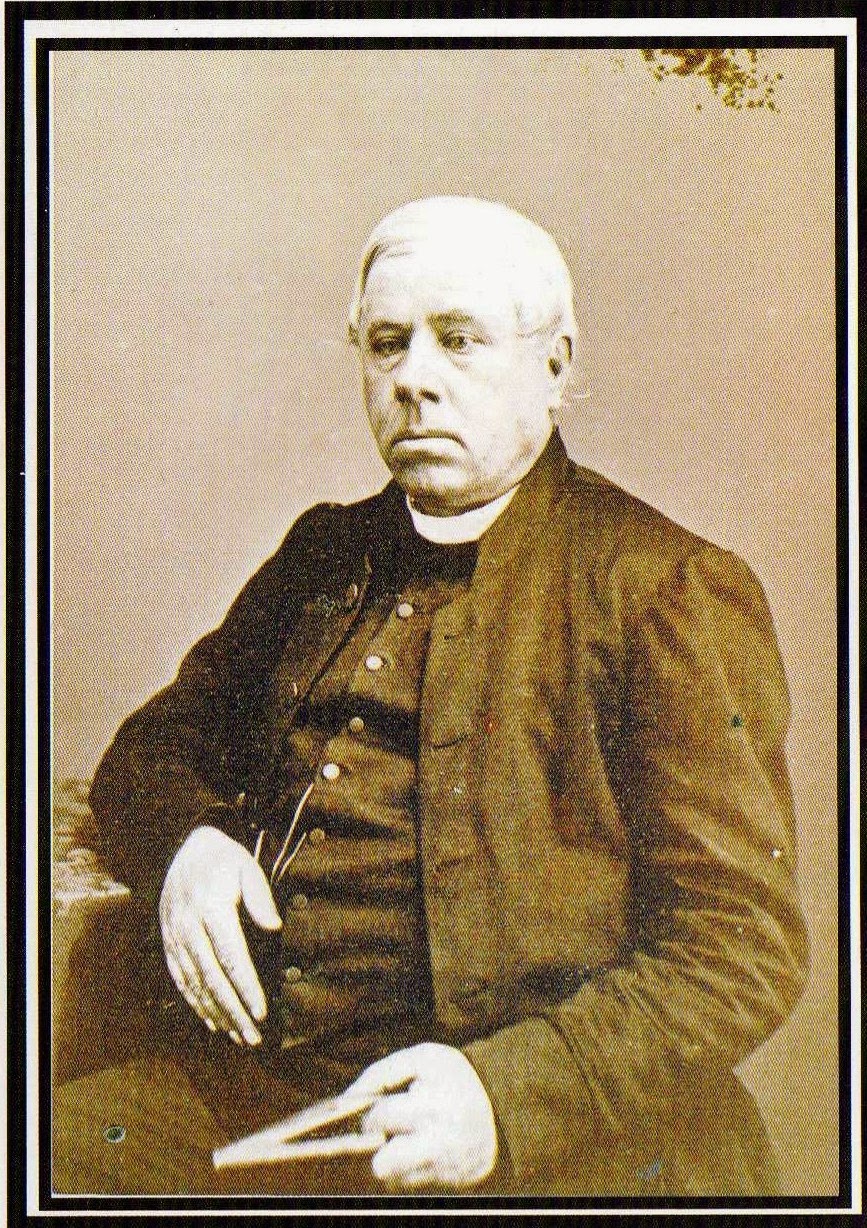 Father Ryan first arrived in South Australia with Bishop Murphy in the year 1814, and was the first Roman Catholic priest On South Australian soil; he held the high ecclesiastical positions of Vicar-General and Apostolic Administrator in his time.
He was the first Catholic priest to say Mass in Kapunda in 1845
Father Ryan was appointed with the task of building a church in Kapunda.
Father Ryan found a suitable place to hold mass for those who couldn’t get to the St Johns church; the area is now where Kapunda Institute stands. Eventually, he chose the site for St Rose of Lima church to be built. The original church has since been destroyed and a new one built in its place.
On the 3rd of April 1864, Father Ryan performs a wedding ceremony for Horace McKinley and Martha Craig.

On 15 August 1864 Father Michael Ryan laid the foundation stone for the Sevenhills church at Sevenhill.
Father Ryan died of apoplexy on 24th August 1865 (Historically the word "apoplexy" was also used to describe any sudden death that began with a sudden loss of consciousness, especially one in which the victim died within a matter of seconds after losing consciousness.)


At his funeral, it was stated
“Father Ryan was a pious and zealous member of the Catholic Church— a man of modest and unassuming manners. In him, the members of his Church have lost a truly benevolent pastor, the poor a ready counsellor, and the needy a friend.”
Posted by Allen Tiller at 19:30 No comments:


In 1850, Adelaide was a small colony with very little to do once work had finished for the day. Gaol Executions, although distressing and grotesque, attracted large crowds of onlookers.
The execution day of James Yates was no different. On that day, the crowd grew to six hundred strong, despite the inclement weather.

Yates had been found guilty of murdering a Shepard at Skillagogee Creek. A fellow workman known locally as “The Sergeant” because of his past military service.

Yates was found guilty of a brutal murder by way of repeated blows to the head.
He denied any wrongdoings in court, claiming loudly that he was innocent, and later that it was self-defence as the old Sergeant had been quite drunk and came at him first.

Yates hanging was a horrible one, with the knot of the noose getting caught behind his neck, and his constant struggling witnessed by the large crowd. He was eventually let down, and his body evaluated before being buried inside the stone walls of The Adelaide Gaol.

The following poem was written by condemned man, James Yates, this poetry, although badly written, was heartfelt and in appreciation of his lawyer, Mr G.M. Stephen, for his tireless, although unsuccessful, efforts to save him from the gallows.


James Yates
Posted by Allen Tiller at 19:30 No comments:

During the war, I was a member of the A.W.A.S. stationed in a country town. One day I was involved in an accident, and during the time it took for me to be extricated from the wreckage; I yelled over and over, "Mum! Mum!"
On recovering consciousness in the hospital, I was handed a telegram from my mother 600 miles away. It read, "What has happened? Are you all right? Love, Mum."
I discovered that at the moment of the accident she heard me as if I were in the next room screaming for her. She sent the telegram and was in a state herself until she heard from me.
MRS. J. COLLINS, Woodville, S.A.

My home is old and rather large. All the main rooms open into a long passage. For several years I often had the feeling, as I walked down this passage, that I was being followed.
If I turned I would see, out of the corner of my eye, a sudden movement as though something about two and a half feet high had just raced out of sight.
This experience was never frightening. It was rather like having a very inquisitive pet that was also very timid.
I came to think of this movement as "he."
One day while I was in the sitting-room he must have become especially curious, for when I pulled the door open to go out, there he was in the doorway.
In the second before he moved I saw that he was very short and thick-set, his head was unusually large and oddly flattened on top, and his face was waxen in texture, although I saw no features. As he scuttled off I saw that he had very short legs.
The poor little thing must have been badly frightened, for I have not seen him since. Still, it's not every day one frightens a short-legged ghost.