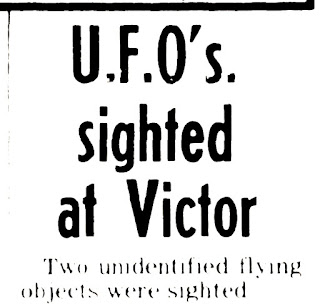 In May 1974 the skies of Victor Harbour on the Fleurieu Peninsula were visited by a mysterious unidentified flying object!

The UFO was witnessed by Mr Neville Dunn of Encounter Bay as well as two friends travelling from Bordertown.

Another witness to the event was First Class Constable Max Griffiths and his wife. The Griffiths witnessed two separate flashing lights travelling from east to west, not far the AMSCOL Cheese Factory (now the Lutheran Church).

The objects appeared from the north east at about 45 degrees in the sky. They eventually rose in the night sky, until one was no longer visible, and after twenty minutes, vanished from the night sky.

The authorities in the region later made a statement that a pilot in the area had radio problems and was forced to land at Murray Bridge. This explanation did not explain the second light seen by the Griffiths, nor the speed and angle of trajectory of the objects…

Have you seen a UFO in your area, let us know over on our facebook page, or in the comments section below.


www.eidolonparanormal.com.au
Posted by Allen Tiller at 19:30 No comments:

Cathedral Hotel: Wrong Side of the Law

Cathedral Hotel: Wrong Side of the Law

After two robberies in North Adelaide, and a number of other smaller thefts, suspicions were being raised within the North Adelaide Police station of the identity of the offenders.
During the investigation of the Cathedral Hotel robbery, which netted the criminals a substantial amount of liquor and money, a timeline of events was established.
The local tram night watchman was called in as a witness and told the police on the night in question, he had seen Constable Edwards, at about 2am, walking his beat, and test the bar-room doors to see if they were locked. He also stated, after Edwards had long passed, he noticed lights on in the billiard room.

Constable Edwards confirmed that he had tried the doors during his nightly walk at about 1:30 to 1:45 am. The doors were locked, with no-one else around.
The detectives investigating the recent crimes now had a suspect, based on rumours they had heard, but more significantly, on the approximate time. The Detectives, Martin, Nation, Dedman and Goldsworthy drove out to Prospect to the house of Constable George Wyatt.

George Wyatt, a police officer of seven years, married with three children, answered the door and allowed the detectives in. He then allowed them to search his property, where they found a few bottles of alcohol, one of which had been handwritten on by Mr Opie. Also in Wyatt's possession were a number of tools, barbed wire and other goods, that Wyatt could not reasonably recount where he purchased them from.

Wyatt was arrested and taken to his own precinct, The North Adelaide Police station for questioning. Wyatt refused to give up his accomplice, stating “I am mongrel enough for what I have done, but I can't settle one of my own mates."

The Police began to look at who Wyatt's mates were, and settled upon searching the house of a friend, and fellow officer of 7 years, Constable John Farrar.

Farrar was found with a sum of money, and some of the missing bottles of alcohol. He was questioned and told his fellow officers Wyatt had given him the money and goods. When asked if he knew where they came from, he stated he did, but only after the fact.

The two police officers were formally charged, Wyatt with burglary and larceny, break and enter, and Farrar with receiving stolen goods.

Wyatt was sentenced to four years hard labour and Farrar with three years of hard labour, both at Yatala prison, amongst some of the prisoners they had probably arrested!

Both men’s descriptions were printed in the South Australia Police Gazette.