The Ghosts of Gawler: Part Two


The Para-Pass, as it was known in 1837, has long been a notoriously haunted location in Gawler, South Australia (about 40 mins north of Adelaide).

I grew up nearby in Gawler South and spent a lot of my time as a child playing in the reserve around Dead Man's Pass, collecting tadpoles, sailing boats through the streams, and discovering caves and other hidden secrets throughout the area. I was also intrigued by the endless ghost stories I heard over the years from other friends who used to play there as a kid.

The area was first used as a crossing point for Bullock dray teams, carting goods from northern outposts like Kapunda, it was a good place to camp also, refill water supplies and have a break under the shady trees. Colonel William Light passed through the area, as did many other famous explorers.
The crossing got its name after an exploration party returning from the Barossa ranges came across an exhausted traveller, whom they offered respite too. Once stopped at the crossing they checked on their new companion who had fallen asleep in the back of their dray, only to find him dead.
Having no tools with which to dig a grave, they placed his body upright in a hollow tree and covered it as best they could with sticks and branches.

Not long after, another travelling party happened across the gruesome site, and, after taking samples of the gentleman’s clothing, encased him with clay in the tree.

The name “Dead Man’s Pass” was adopted in 1842 as the permanent name of the South Para River ford where the hollow tree coffin was located.

Before European settlement, Dead Man's Pass and the Gawler region were the home to the Kaurna Peoples, Australian Aboriginals who used the area for hunting food, shelter and water. There are numerous caves hidden throughout the location, some containing Aboriginal paintings.

The area has seen much death, in 1927 there was a swinging walk bridge installed across the river, a Mr J Bald, a local man, leaned over the side of the rope bridge, and nearly severed his head when he slipped.

In 1901, Patrick Condon, a Gawler Corporation employee had a fatal accident where his night cart flipped when it fell down an embankment, and landed on him, killing him.

Also in 1901, a young boy, who was also crippled, was found dead in a billabong. Anton Johann Linke's clothing was found on the banks by another young lad, who went to search for him, only to find Anton floating in the water, dead.
Do any of these people now haunt the location? That we cannot say, however, a number of other ghost stories have surfaced over the years. 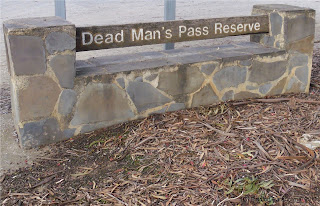 There are many stories of paranormal encounters at Dead Mans Pass. If one cares to visit the “Ghost Village” website, one can read the story of a young man and his mate who were riding their bikes down First Street. They were going too fast, and one kept hearing a voice in his ear say “go right!” indicating to turn right into Gawler Terrace.
The boy didn’t have much time to make a choice, if he swept left around the Dead Man's Pass bend he would go into oncoming traffic, if he managed to turn right, he wouldn’t make the turn.
Going against his instincts, he turned right, and ploughed straight into the curb, flying through the air, and hitting a massive gum tree.
He lay there stunned.  He looked up and saw two figures standing over him. A man and a woman. The man said, "You're lucky to be alive, lad," and the Lady said, "Take heed, boy, you only get one chance like this!"…
The boy's mate came over to see if he was ok. Laying on the ground, without a scratch on him, he asked his mate where the old people had gone. His mate replied that he hadn’t seen anyone, but he had heard his friend talking to someone. He then said he had watched him fly through the air, over 33 feet of gravel, and then land, almost softly on the big gum tree. ( read the entire story here: http://www.ghostvillage.com/encounters/2006/10022006.shtml ).

Another more recent story involves seeing a woman, in period clothing standing near the back of the Ambulance station. This is a personal experience story that may appear later in another publication on this blog if the witness is prepared to offer it.
Recently, I was down in the Pass myself, showing some other paranormal teams around the place who had never been there before. As we were walking through, one team noticed something odd, and began filming, what appears on the video is a younger person hiding in the bushes watching us, we don’t believe anyone else was there at the time, at least not in the exact location we were, which was very far in the reserve, and no-one left while we were there over the next few hours. Was it a ghost? Well of that we are uncertain!

Dead Man's Pass remains a mysterious place, but not one to wander in to at night alone, due to dangers with the living more so than the dead!